Sidebar Sidebar
Menu
Two Offshore Wind Farms Get
The two offshore wind farms are in two different locations. One is about 14 miles south of Jones Beach. The other is about 30 miles east of Montauk Point. Combined they will produce 1,700 megawatts or renewable energy. As shown below they are going to be placed in prime fishing territory. Please notice the area of the leased underwater lands. They are much larger already clearing the way for more windfarm once they go into operation.
Could Hurt Local Fisherman and Environment.
Scallopers will no longer be able to scallop that area. “This isn’t just about fishermen,” said Bonnie Brady, the executive director of the Montauk-based Long Island Commercial Fishing Association. “This is about the environment. You’re industrializing the ocean floor.” Then of course rec boats will too have to keep away from them. If you look at the leased area, it’s evident that they will be adding to the 30-windmills in the very near future. This set will cost 2.1 billion dollars and Long Islanders will foot the bill. Any new Wind Farms will be paid by all NYS residents. 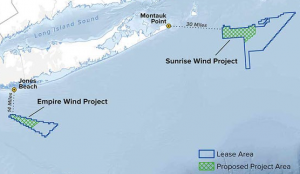 Is This The Answer
I’m not opposed to clean energy – like nuclear – but I am concerned with these wind farms being another threat to the marine environment. Never mind all of the birds that they kill.&nbsp; It’s the 30-miles of buried cable needed to get the energy to Long Island. Then consider that NYS has committed to 2,400 megawatts from offshore windmills over the next 10 years. And 9,000 megawatts by 2035! How much of our fishing grounds will be off-limits then? How much of the bottom will be ripped up? What effect does that have on our marine environment? Where will it end?
Don’t get me wrong as I support clean energy but . . .
I also enjoy fishing. I see this as another obstacle to going out and enjoying a peaceful day on the water.

During the summer months I run a number of charter trips to the Montauk/Block Island area so this does impact me directly.

Two years ago when I first learned of this project I started investigating and also attended a couple of the public input sessions held at East Hampton Town Hall. The first shocking fact was the plan to place this farm right on top of one of the most productive offshore areas in the tri state region, Coxes Ledge. The next shock was that the PR person for Deepwater Wind as well as some of their project managers, had no idea they had selected a spot with such a rich fishing history. Or that commercial, charter, and private boats from the 4 states closest to Coxes fish this area regularly.

Then their "scientists" tried to justify the project telling us how little a negative impact this would have on the fishery or the environment as a whole. To add insult to injury virtually all of their "scientific" data was gathered from a West Coast study of different species in a different climate and based upon the reactions of fish kept in pens! No one there could really tell you the potential adverse affects the very large EMP's emitted from these structures would have on fry, juvenile, or adult fish in their natural environment.

Next they tried to suggest that the nearly 40 miles of underwater cable that would have to be laid back to the mainland was going to have little or no impact on the fishing or even the boat traffic traversing this very busy waterway during the installation process. And, we also learned that the functional lifetime of these behemoths is only about 20 years under optimal circumstances. No real thoughts about the decommissioning and replacement process.

Naturally many of the local East Hampton town residents, as ecologically astute as they claim to be, want to have large substations installed on their streets to receive and distribute whatever power these devices will generate.

My final observations, for now, are 2 fold. First, everything I have read about the electric rates for residents of Block Island, where the first 5 windmills went up around 5 years ago, is that they are actually paying higher utility bills. Also, while they are still allowing fishing close to these structures there are 2 main problems here. First the area is not really accessible to those who trawl for a living for fear of fouling their gear. Second, while we are still allowed to fish close by with the Party/Charter fleet what do you think will happen following the first maritime accident, or worse, terrorist threat. You can bet the Govt. will enact large protection zones around the windmills.

Being a lifelong fisherman and charter captian for the last 20 years there is no doubt I am as environemtally consious as anyone. I too would like to see new and cleaner forms of energy put into use. But somehow whenever the Govt. gets involved, even if it is supposedly in partnership with the private sector, things get screwed up.
Reactions: missinglink08, MakoMike and PropellerJohnII
Show hidden low quality content
You must log in or register to reply here.
Share:
Facebook Twitter Reddit Pinterest Tumblr WhatsApp Email Link