Menu
Install the app
Sidebar
You are using an out of date browser. It may not display this or other websites correctly.
You should upgrade or use an alternative browser.
I’ve been in the fishing media business for decades and I have never seen so many sharks close to the beach in our waters. There was a confirmed bull shark caught off of Fire Island beach and a confirmed white shark, which grabbed a fluke, less than 1/2 mile off the beach. I personally have seen numerous sharks while fluking off the south shore.

I also have never seen so many shark bite offs on everything from striped bass to tuna. Most tuna anglers are seeing this on the majority of trips. I have never heard of beaches being closed or swimmers being told to go no more than ankle-deep because of a fear of a shark attack. These people are watching too much Shark Fest on TV. These sharks have always been close to the beach

Sure we have more bait in our waters than any state on the coast, as we’re the only state that keeps the bunker reduction fleet out of our waters. We now have all year classes of bunker that are paying off for anglers big time. Those sharks were always near, they were just further offshore. The continued growth of the sharking from the beach, like the bull shark that was taken, as well as many protected sharks, are bringing attention to a fact all anglers are well aware of – we have a lot of sharks here. We always have. The difference is we now have a lot of anglers targeting them from shore combined with social media, and it’s causing hysteria.

Below is a video of sharks attacking bait just off of the beach.

We've had two hammerhead sightings in the last two weekends fluke fishing in Montauk (had one follow a sea bass up this past weekend and last week saw a large Hammerhead swimming from boat to boat without a care in the world). Had a thresher grab a bucktail and do an aerial show for us this past Saturday as well. Montauk Star had a white marlin on in the Outer Frisbees a couple of weeks back too.

I don't know - seems like more activity than prior years. That's not to say we didn't see shark activity in years' past; we most certainly did - just seems this year there seems to be more of it. I don't really have a good explanation why though....
Reactions: george

Was that filmed locally?? Where about on the South Shore??

Aquarius said:
Was that filmed locally?? Where about on the South Shore??
Click to expand...

I'm not 100% sure, but the tankers in the background lead me to believe Jones-East Rockaway. I'll see if I can find out.

Now the state adds to the hysteria with this: I had to respond here to what we need to do to avoid being bitten by a shark

Humans have to be cognizant that when you enter an ecosystem if you're NOT the apex predator, your new title is LUNCH!! Therefore you need to take precautions and lower the odds that you'll be the next course...

The last time someone was bitten by a shark in NY waters was in 1909. And ironically he fell overboard while sharking. Not exactly his day. They were probably waiting all day for a bite

Is it possible that more n more bait is taken further out to sea by larger bait factory type vessels therefore the predators have no choice but to come closer n closer to shores whereas none such vessels are permitted to fish? Just asking...
Reactions: Matts

I was fortunate enough to be able to speak with two noted marine experts (scientists) who have examined the longitudinal data and when I asked them (separately) why I was seeing more and more sharks each year, their response was the same. Warming ocean temperatures are widening the gulf stream currents that historically have largely bypassed Long Island at greater depths. With those bands of warmer water intruding closer to shore, the menhaden that they're feeding on have moved closer as well. Thus the sharks. If you think about it, haven't we also seen more bait than in previous years as well? My evidence is only anecdotal, but I listen to scientists. The two that I spoke with have no stake in the game, but - because global warming has become a political issue for some - they avoid publically making statements about warming waters.

I listen to the scientists.
Reactions: JoeBfishing and Roccus7
C

This is what I see. I'm for sure no way near a marine biologist.
They're suffering from famine. The commercial fisherman are
taking away there food and now they're foraging elsewhere.
These are some of the species of sharks that are commonly
found inshore. 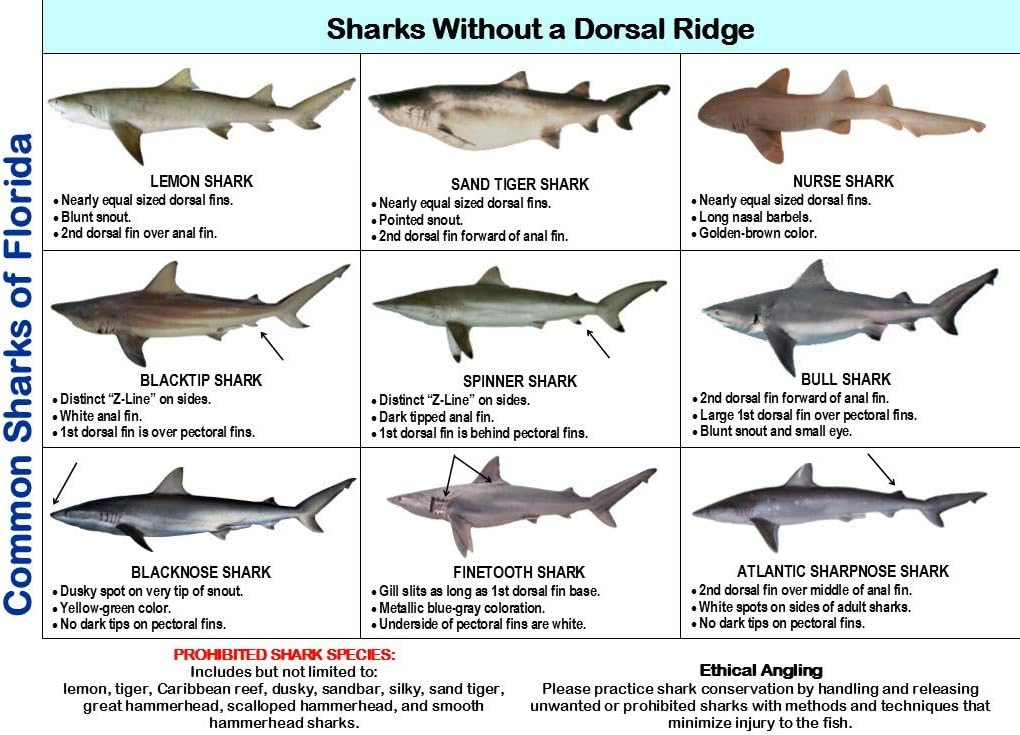 Again, I'm no marine biologist, but I think it's evident that fish will follow their prey. We have more bait in our waters than in most states due to the Omega "not a ban" ban. We have every age and size and each year we're seeing more and more menhaden. We have seen an early inshore tuna fishery that was on bait. Like most hunters, are opportunists. Similar to what you would see in Alaska when you're trying to reel in a salmon with a sea-lion try to grab it.

Sharks have always been close to our beaches this is nothing new
Reactions: MOJOE and Capt13

was in a shark tournament a number of years ago - we were set up off of Seaside Heights, NJ about 100 yards off the beach & our baits were getting hit - people frolicking in the surf unaware
Reactions: CELLFISH and JoeBfishing

wHATS nEXT?
Reactions: cany and Roccus7

This out to be amusing. They've tagged over 200 sharks in MA and now we'll put the sensors out. With our "healthy" seal population, ya think those pingers will be setting the sensors off scale??

Maine to partner with Massachusetts in study of great white sharks The population of great white sharks in Northern New England has increased as the seal population has rebounded. Photo courtesy of Discovery Channel via AP

Maine state marine biologists will partner with Massachusetts scientists to study the movement of great white sharks in coastal waters of the Gulf of Maine.

The Maine Department of Marine Resources announced Friday that it will place 20 acoustic receivers in “near shore” waters off the Maine coast to capture data from tags that have been placed on great white sharks by Massachusetts biologists. The effort will help add critical data to a 10-year white shark study conducted by the Massachusetts Division of Marine Fisheries and to work done by the nonprofit Atlantic White Shark Conservancy.

“This effort will provide a much better understanding of when they are in our waters, what their habitat use is, and how those change over time. This work is important from a public safety standpoint and it will provide valuable biological information,” Patrick Keliher, the commissioner of the Maine marine department, said in a news release.

Keliher added that the Maine department also will explore a possible white shark tagging program of its own.

Dan McKiernan, director of the Massachusetts department, said in a news release that Maine’s additional 20 receivers already will help to expand the study and close a “knowledge gap” of where white sharks travel.

In July, Harpswell summer resident Julie Dimperio Holowach of New York City was killed by a great white in Maine’s first documented shark fatality. The shark that attacked Holowach off the Harpswell coast was later identified as a great white shark from a tooth fragment by a Massachusetts scientist.

In September 2018, a 26-year-old man from Revere, Massachusetts, was bitten by a white shark off Cape Cod Beach and later died at the hospital in the state’s first shark fatality since 1936.

The Conservancy, a nonprofit which works to advance white shark research, will fund 12 of the Maine receivers, according to the Maine department. Data from the acoustic receivers also will be uploaded to the Conservancy’s Sharktivity app that shows white shark activity detected by receivers.
Show hidden low quality content
You must log in or register to reply here.
Share:
Facebook Twitter Reddit Pinterest Tumblr WhatsApp Email Share Link