Toggle sidebar
You are using an out of date browser. It may not display this or other websites correctly.
You should upgrade or use an alternative browser.
S

Capt. Pete,
Looking for your expertise. I currently own a Abu Revo NACL 50. Love it! I'm looking to add another Abu Revo to the arsenal. I was thinking about the Quantum Accurist with the flippin switch, but leaning more towards an ABU Revo. I have a lot of trust in the Abu name and Revo series, although I see another ABU series, Max STX series that has a flippin switch, and at $80 I'm wondering if it is comparable to the Accurist?
There are a few Abu Revo choices, I know the Revo Beast is top of the line, ideally looking for a less expensive option. Will be used mainly for fluke. Reviewing the ABU site I see the following models:
- Revo X
- Revo Winch
- Revo SX
- Revo STX
- Revo S

Any suggestion on which model you recommend, any to steer clear of?

And I'm going to need another rod to fill out this combo- looking to be in the $150 range for the rod. I have a few JW Nexus rods, they are great, but would like to mix it up a bit, ideally a spiral wrapped factory rod, but would consider a normal conventional rod. I recall someone mentioning a Daiwa Proteus Spiral wrapped rod but I cant seem to locate the model on line.

Hi sptogflukejigr.911, a bunch of questions you have, so let's see if I can help.

First, the Accurist isn't a bad reel at all, in fact its a good buy at the $100 level. I reviewed it here, and there's quite a bit to digest in my original post in that thread:

New Quantum Accurist S3 Bait Caster - Not Bad At All!

So, I am "lucky" enough to see plenty of reels come across my bench (some bench - its actually the top drawers of my Snap-on top cab, with a towel across them), LOL! Most of these are in pretty dire shape, but I get more than few every season that are brandy-new, with a request for some sort of...

Now as to the Revo series - As you may already be aware, the Revo and the Revo NaCl/Toro are quite different, with the latter being far larger and more robust. One of my favorites to work on for my friends, as there's never anything to do, other than break them down, clean 'em out and re-lube to MY standards. They don't seem to ever break.

The Revo series are smaller and like the Accurist are really intended for FW bass fishing. Neither is as robust as an NaCl, and you should keep this in mind when purchasing and using them. In the Revo Gen4 series, I like the Winch, which I own - (see: TEAR IT DOWN! TEAR IT DOWN! The G4 Revo Winch, I mean . . . ). It is an EXCELLENT reel for fluke jigging, and has held up on my boat perfectly for what, three seasons now? I highly recommend it.

My new Abu Gen 4 Revo Winch arrived a short time ago. And what a beauty it is! What follows is a fairly comprehensive review of how I prepare my or anyone's new reel for salt water usage. This is not a tear down/rebuild of a well-used reel - that would entail many more steps and much more...

You could go upmarket a bit and choose the Revo Beast, but I don't see the point in spending the extra money for a few seals and a SLIGHTLY different drag system. The Winch does all that need be done on the fluke grounds - for me.

I would steer clear of the Revo X series - they are de-contented reels, partly Gen3 and partly Gen4, and I think I would go with the Accurist over the RevoX - unless its the Revo X Winch - which has the lower ratio gearing, which is uber-important to me, and comes in right around what Quantum is asking for the Accurist.

I'm actually not a fan of a flipping switch - as I have seen one (or maybe two) fail, and as a reel tech changing it out is a royal PITA. Nice enough feature I suppose, but far from a deal-breaker should it not be present. I've fluked with low-pro bait casters for many years and never felt that my catching would improve if I only had a flipping switch. So there's that.

Now here's the thing - Abu is about to release their Gen5 Revos, so you soon may be able to pick up a Gen4 for a smokin' price, if you look around. There's absolutely nothing wrong with the Gen4's and so they would be a great buy, if you can find the right dealeo. I will be on the lookout for another Gen4 Winch myself, which will serve as a backup for my entire collection of low-pros, should one go down.

I covered the Revo Gen5's here - which thread was a nice piece of work, if I say so myself. That thread took an entire day to write and edit - but I had nothing else to do, as I was down with the COV that week. My "loss" your gain.

So though I'm fighting off a COVID infection (doing better since Monday, thank you very much!), it is time to briefly look at the new gear being unveiled at this season's show. This will be an on-going post, as I'll append new items to it as I find them. Right off the bat, Shimano is giving a...

Now about the rods - there's really no end to them out there, but if you want to stick around $150 (or so) AND go spiral-wrapped, then I recommend the Dark Matter Skinner original rod. One of my guys had one with him on our trip the week before last, and it did a fine job on the offshore grounds. I didn't even know it was a Skinner rod - I originally though it was a $350 Shimano Game Type J - that's how nice it was.

So there's a bunch of my thoughts - I dunno if I helped or hurt, but it's all what I honestly believe, so there's that . . .
Reactions: hartattack, longcast, george and 1 other person
S

Once you decide, come back and let us know in what direction you go.
F

Pete on the Gen 4 I really liked the reel but atleast 5 times while fishing I hit the button on the lower left side that opens the side plate. Maybe its my large mitts or Im just clumsy. Have you ever had this issue?

No Joe, its your big hands. And you bring up a good point that I did make in that earlier thread.

This is yet another reason to go with the Gen4 Winch over the Beast and any other reel that has a sideplate that totally disconnects from the frame, once you hit the sidepate "Open Lever."

The Gen4 Winch's sideplate is permanently attached to the frame, and is meant to swing down and out of the way when opening to gain access to the spool. 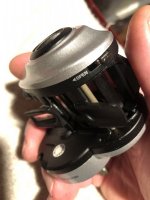 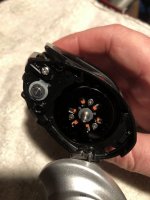 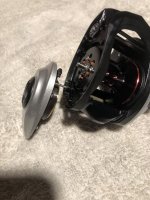 Hi Pete,
I wanted to follow up on the decsion I made- I picked up the Penn Fathom 200 Low profile reel. I wanted to shop local, tried to stay away from ordering online. The shop didnt have any of the Abu's I was looking, but I believe this newer Fathom LP likely has much of the same technology that is inside an ABU, being they are sister companies.

Let us know how new Penn works out, as I know of no one else that owns one. Though they are not spiral wrapped, both the new Shimano Trevala PX and Daiwa Harrier X rods (the new gray ones) are very nice.

Or just go with the Dark Matter Skinner rod, its also a nice piece. It most certainly is spiraled.
F

Leprechaun said:
Let us know how new Penn works out, as I know of no one else that owns one. Though they are not spiral wrapped, both the new Shimano Trevala PX and Daiwa Harrier X rods (the new gray ones) are very nice.

Or just go with the Dark Matter Skinner rod, its also a nice piece. It most certainly is spiraled.
Click to expand...

Heavier Dark Matters are sold out and there were 2 lighter ones left after I picked up the lighter bay version on Thursday. Guy at J&H said they have orders in for more but no idea when they are arriving. Last shipment took about 3 months from time on the boat to store.
F

SPTOGFLUKEJIGR said:
Hi Pete,
I wanted to follow up on the decsion I made- I picked up the Penn Fathom 200 Low profile reel. I wanted to shop local, tried to stay away from ordering online. The shop didnt have any of the Abu's I was looking, but I believe this newer Fathom LP likely has much of the same technology that is inside an ABU, being they are sister companies.