Notice how they mention having "To rebuild the walleye population, DEC implemented special regulations and managed a growing population of cormorants on the lake." I am beginning to see more and more of this upstate, but what about our local lakes downstate? What about all of these birds we're seeing in our bays and the sound. Add to that the current explosion of seals we're seeing around the island. I'm not saying they're eating everything, but it did take taming the population in Oneida Lake to bring back the walleye. Which by the way is pretty amazing.

New York State Department of Environmental Conservation (DEC) Commissioner Basil Seggos today announced that anglers have at least one million reasons to fish for walleye in Oneida Lake, according to a study with Cornell University researchers who have been tracking the lake's walleye population for more than 60 years. The population of adult walleye was estimated to be one million fish in 2019, a level that has not been reached since the 1980s.

"It has been three decades since we've seen the Oneida Lake walleye population this abundant, and it is twice the size observed in any year since 1993," said Commissioner Seggos. "Oneida Lake is a nationally recognized fishery and we expect the fishing to be even better in the coming years, cementing New York's status as a world-class destination for anglers. This robust walleye population is due to DEC's responsive management and the dedicated research performed by Cornell University."

Randy Jackson, Associate Director of the Cornell Biological Field Station at Shackelton Point, said, "Walleye anglers took advantage of this booming population in 2019, and experienced catch rates over 0.5 fish per hour. With another large year class expected to recruit into the fishery in 2020, we expect walleye fishing to remain excellent in Oneida Lake for several years to come."

The DEC and Cornell study results represent a remarkable recovery of the adult population of walleye, which declined through the 1990s and has remained steady at around 400,000 fish since 2000. To rebuild the walleye population, DEC implemented special regulations and managed a growing population of cormorants on the lake. Large year classes of walleye in 2010 and 2014 have contributed to the walleye population increase, and another strong year class from 2016 is anticipated to push the adult population even higher next year. DEC will continue to work with the U.S. Fish and Wildlife Service to develop an approach for cormorant management to safeguard our fisheries from over-predation by these fish-eating birds.

To help manage the Oneida Lake walleye fishery, more than 150 million walleye fry (newly hatched fish only a few millimeters long) are annually stocked in the lake. The legal minimum size for walleye in the lake is 15 inches, and there is a reduced daily possession limit of three walleye. Walleye season runs from the first Saturday in May through March 15. For tips on fishing for walleye visit DEC's Fishing for Walleye webpage. 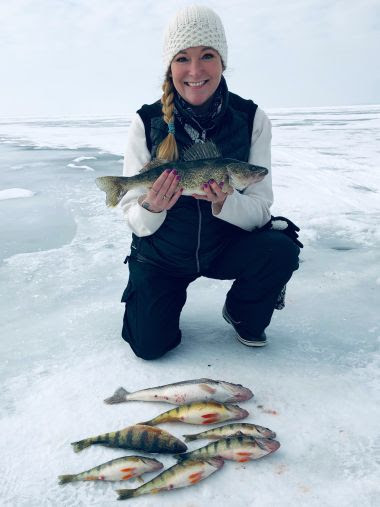 WomenHuntFishNY photo contestant Kristyn Hanna proudly
holds a walleye caught from Oneida Lake in February 2019.
Walleye season on Oneida Lake is open until March 15,
and opens again on May 2.
Reactions: longcast and Roccus7

They may not fight great, BUT there's no denying that walleye are one of the finest eating fish that swims in either lakes or sea...
Reactions: george

I've been at Belmont lake a couple times when they're stocking the lake in the spring. This past year there was easily 6-8 ospreys dive bombing and even more cormorants diving down. All of them coming up with fish it was really cool to see.