Don't get me wrong here, I do love them oysters, but when an the good old American Oyster, Crassostrea virginica, is pulled from water at 35 - 40°F waters, I'd be hard pressed to tell which ones came from Place A as opposed to Place B. I've always believed that ambient water temp is critical. I've even noticed that my October oysters, harvested from mid-50°F water aren't nearly as nice on the raw bar, as the December mid-40°F water, and I can't wait for my January oysters which should be right in the sweet spot.

And for the record, I've never been a fan of the European oyster, way too metallic, although if you happen to be in Ireland and can get a proper pint of Guinness, it's not a bad match. And I've heard from the local shellfishermen that Ryan McPherson, a Masshole transplant up to the river next to me, is a hack and has to gotten bailouts from local oyster farmers because he's having problems raising his own. He's also full of chit, in that the oysters I get come off the bottom and I will have shells that splinter...

But I digress, here's how the Foodies think we should be reacting, just like Wine Snobs...

The bivalves’ merroir — yes, merroir — is much like grapes’ terroir, telling a much deeper story about the place they were grown, Melissa Clark writes. 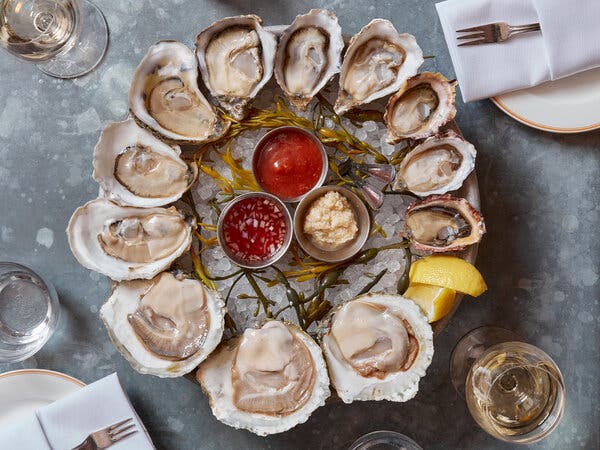 To get the best sense of oysters’ individual flavors, it’s best to eat them unadorned before adding garnishes like mignonette or cocktail sauce. Credit...Joel Goldberg for The New York Times

On a recent early evening at Maison Premiere, an oyster bar in Brooklyn, I sampled five types of East Coast oysters, perched on a platter of crushed ice like briny gems. As I slurped each one, I noticed their individual charms: the minerality of the Moonstone, the fresh softness of the Onset, Colville Bay’s deep umami sweetness, the briny notes of the Malpeque, Violet Cove’s hit of seaweed and salt. Although these bivalves were all the exact same species — Crassostrea virginicas, also called the Eastern or Atlantic oyster — they were as distinct from one another as a buttery Napa chardonnay is from a crisp Burgundy Chablis.

In sommelier-speak, the expression of these differences is called terroir and reflects how factors like the environment, climate, geology, soil health, viticulture and weather affect the flavor and feel of a finished wine. For oysters and some other bivalves, including scallops, the term of art is merroir, a play on “terroir” that replaces the French for “terre” (land) with “mer” (sea). Learning more about it can deepen a seafood eater’s experience in the same way that understanding a little about terroir can help wine lovers better appreciate the pinot noir in their glass.

Krystof Zizka, the oyster buyer and an owner of Maison Premiere, said there was a big overlap between wine culture and oyster culture.

“The same kind of grape varietal can take on a completely different personality depending on where and how it’s grown,” he said. “It’s the same with oysters.”

But though there are thousands of wine grape varieties, there are only five oyster species currently raised in the United States, and of those, just three are largely available across the country. The Atlantic oyster is native to the East Coast, and the West Coast is home to the Pacific oyster and the Kumamoto oyster, two Japanese varieties brought over to repopulate areas that were overfished during the 19th-century gold rush. The last two species — the European flats (also called Belons) and the tiny, umami-laced Olympia oyster, native to the Northwest and cultivated there in small numbers — are rare finds. And just like with grape varietals, say, the way a cabernet sauvignon grown in Bordeaux has a completely discrete character from one grown in Napa Valley, an Atlantic oyster harvested in Maine is radically distinct from one harvested in Louisiana.

Wild oysters once grew thickly in U.S. waters, but centuries of overfishing, pollution and habitat devastation have thinned their population drastically. Today, more than 95 percent of all the oysters consumed in the country are cultivated on highly sustainable aquafarms.

It’s the interaction of aquaculture techniques and the environment that creates merroir, and both can significantly affect the final product. 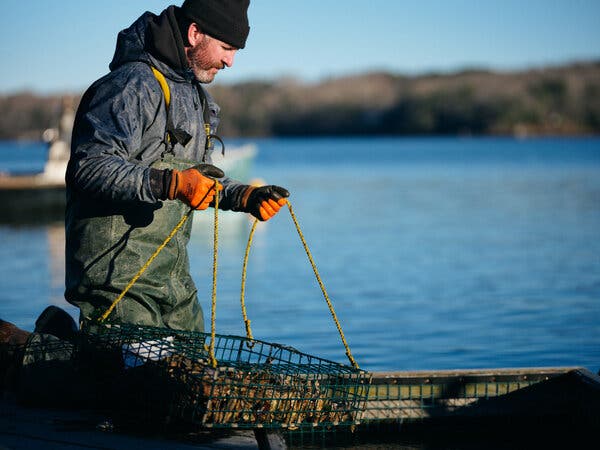 Ryan McPherson of Glidden Point Oyster Farm with a crate full of freshly harvested oysters from his farm on the Damariscotta River. Credit...Nick LaVecchia for The New York Times

Ryan McPherson, an owner of Glidden Point Oyster Farm in Edgecomb, Maine, can easily rattle off the elements of the Damariscotta River that contribute to its merroir, including the cold, pristine, brackish water; the abundance of plankton and algae that flow on the currents; and the silt on the river bottom.

But what sets apart his (sweet, dense, stony) oysters from the (briny, slippery, mild) ones just 1,000 feet across the river at Mook Sea Farm is farming technique. At Mook, the oysters are suspended in cages that move with the tides, encouraging a clean flavor and slightly rounded shell that holds more of the oyster liquor. At Glidden Point, Mr. McPherson farms his oysters directly on the hard river bottom, which gives them a complex, minerally tang and contributes to the growth of a strong, consistent shell that doesn’t chip or splinter when you shuck it.

“Merroir is more than just about taste,” Mr. McPherson said. “Each oyster shell tells a story, like rings in a tree.”

At Hama Hama Company, a family-run oyster farm in Lilliwaup, Wash., the Pacific oysters are grown in Hood Canal, nestled alongside a Douglas fir-filled forest.

Adam James, one of the company’s fifth-generation co-owners, said that even the landscape surrounding the water could have a direct effect on the oysters.

“Oysters don’t just consume algae and phytoplankton, but also organic detritus in the water, like sea grass, elder leaves or, in our case, fir needles,” he said.

When describing his oysters, he reached for a vocabulary that was part sommelier, part sea dog.

At their best, he said, his Hama Hamas are “mild and clean, firm like an underripe peach, with a melon or cucumber finish that’s — what’s another way to describe crisp and fresh?” He took only a second before finding the right word, “it’s like a duck dive.”

Mr. James recommends slurping his oysters straight from the half shell while they are still raw, whole and full of life force. This is when their merroir is at its strongest and most vibrant.

And this is exactly how Aaron Waldman, the founder of The World’s Your Oyster Company, a Northeast oyster C.S.A., encourages his clients to savor the bivalves he distributes weekly across New York City.

“That briny liquid in a freshly shucked oyster shell is the seawater it’s been growing in,” he said, adding that those flavors aren’t nearly as apparent after a stint in the oven or on the grill.

In the same vein, he urges oyster-eaters to try them first unadorned before adding any mignonettes or cocktail sauces.

“A little lemon is all you need to cut the salinity,” he said, “this will give you the purest merroir experience.”

Although oysters are the seafood with the most obvious merroir, other sea creatures, like bay scallops and clams, can also express it, especially when they are eaten raw.

Togue Brawn, who owns Downeast Dayboat, a scallop purveyor, offers sea scallops that have been harvested in small quantities from different bays in Maine, each with a slightly distinct flavor and texture. They run the gamut from those soft and mild from Cobscook Bay, to funkier, firmer, salty adductors from Little Machias Bay.

Appreciation for the merroir of sea scallops is a recent thing, Ms. Brawn said. It can happen only with scallops caught on dayboats that stay in one location close to shore (not from the large fishing boats that travel miles out to sea).

“For decades in Maine, they’d truck their local scallops out of state and mix them in with the harvest from larger boats in federal fisheries,” she said. “It’s like taking a bottle of Dom Pérignon and pouring it into a vat of Barefoot Bubbly.”

Perhaps the best reason to consider the merroir of any ocean denizen is that eating it can transport you to a place beyond your plate, whether that’s a wild Pacific Northwest coastline fringed with firs, or a sandy Long Island beach in the summer. (Yes, you can eat oysters in the summer, but they are at their sweetest in the winter.)

Rowan Jacobson, who has written several books on oysters and the environment, said that eating a raw oyster is a uniquely visceral experience.

“So much of the food we eat has no somewhere-ness to it at all,” he said, “and especially in this age of disconnection, the desire to connect to the natural world is primal.”

Oysters, slurped raw from the shell, can be our bridge there.

As Mr. Jacobson wrote in his 2016 book “The Essential Oyster”: “Every oyster is a tide pool in miniature, a poem built on salt water and phytoplankton that nods to whatever motes of meaning shaped it. It is the sea made solid.”
Reactions: MOJOE