Sidebar
You are using an out of date browser. It may not display this or other websites correctly.
You should upgrade or use an alternative browser.

I usually just skin my fish.

But I was wondering if you have a fish scaler that you think works well. A link to buy, if you have one, would be great.

Yep, I've got a STRONG recommendation on this one -

Over the years I've tried pretty much every type of scaler on the market, and this one absolutely blows away every single one of them. Its nearly unbelievable how fast it removes scales from fish like Porgies , Biscuits, and the like. In many cases it takes them off in a single pass. I dunno how it does it, as it doesn't LOOK very capable - but if you try it, you will be amazed at its efficiency. Plus, its made of brass, so no nasty rusting between uses. I highly recommend it!: 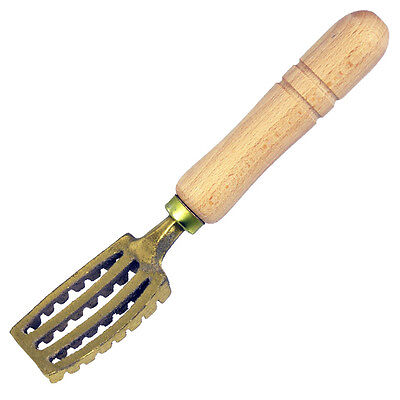 I particularly like that the studs are flat, so it cannot dig into the meat, unlike those dopey "$3 stamped steel specials" that every B&T shop has in a box atop their counter. Those things really s*ck.
Reactions: BennyV

Thank you gentlemen! I saw that one and it just didn't look like it would work that good.

One question: Is this the same one? ($9 vs $25)
Amazon.com: Brass Fish Scaler L: Seafood Tools: Kitchen & Dining

One of my fav movies!

I think my wife found my scaler on the "big river" site as well. You will be impressed with this tool's performance.
Reactions: BennyV

I’ve had a bunch over the years. I tend not to spend to much on them due to the wear & tear they get on a weekly basis. Plus they get dropped overboard from time to time. I’ve had a magic scaler which was great for larger fish - bass & blues. I’ve also been an avid user of the $5 special from the local bait & tackle shops with a few modifications; namely half a roll of electric tape around the handle. I did purchase a mode similar to the one Lep posted from Bass Pro a month or so ago. If it doesn’t live up to the hype I’ll pickup the Japanese one Lep posted, but hopefully I won’t be cleaning many porgies this year.

For the $9, I purchased the one on Amazon.

I only fish for porgies a couple of times a season on my buddy Capt. Mike's boat - during the May spawning run, out in the Peconics. Those are some serious bronto-specimens out there. My fam isn't real enthused about eating porgy - EXCEPT when made into fish tacos - those are Muy Bueno!

I also keep some for drop-off at my Greek buddy's house. He wants them gutted/scaled/heads left on, for his authentic Greek BBQ roasting recipe. From what I recall, Its so simple - EVOO, oregano, lemon, salt & pepper, shaken into a emulsified slurry and basted over the fish, which are held captive in one of those wire fish basket contraptions.

Oh, and though charcoal is greatly preferred to do it properly, a gas grill will give acceptable results, according to him. They certainly LOOK good, in the pix he sends me. 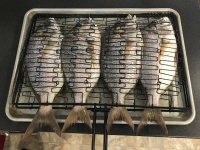 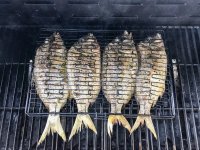 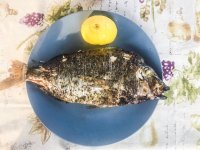 He swears that THIS is the way to eat fish. Of course he's never tasted Mrs. Lep's toaster-oven Ling Oreganata. . . but this just might be a Greek vs Italian ethnic preference, I suppose . . .
Reactions: MOJOE, longcast, DungareeSailor and 2 others

Interesting. Years ago with my first boat I scaled my catch. Since the mid 90s, except for snappers on the barbecue, I skin everything, except the occasional striper or large fluke wherein I just scale along the dorsal to make the first cut much easier. Taste-wise, and that is really all that matters to me, what is the difference in skinning vs just scaling, regarding preparing fish one of three ways, baked or broiled in the oven, barbecued, and put into the air fryer after that bread and egg thing ?
(SWMBO would prefer skinning since it drives her bananas if she finds a scale anywhere!)

I tend to leave the skin on all my fillets. I also usually cook my seabass whole. I have been using the $1.00 ($5.00??) stamped scalers that I have had for decades. They work but I might just give one of those Jap scalers a try this season.
Reactions: BennyV

SWMBO DEFINITELY would not want to see the head on the plate and while I have had trout still on the bone neither of us enjoys eating fish as much that way. I guess I should have added to my query above that regarding taste OF A FILET, skinned or unskinned ?

Probably better skin-on. But only good for broiled/baked/pan seared - like salmon, for example.

However, I can’t imagine a fish fry during which a dissection of the batter or panko-dipped fillet would be required to eat it. In any case, my “house chef” pretty much insists on clean, skinned fillets.

And as we all know, “happy chef, happy life!” Or something along those lines.
Reactions: MOJOE, longcast and pequa1

Thinking on it some more I realized that when we have prepared fish with skin on, we usually try to peel away the "meat" and leave the skin on the plate... I even do that with barbecued snappers in the aluminum foil canoe.
Reactions: MOJOE
T

Thanks Pete,Since I am married to a Greek woman from the Islands of the Agean sea I have to keep numerous Porgies and Seabass whole every year or face the consequences.I have eaten them the way your friend specifies,Pretty good if you ask me.Well I seemed to have miss placed the scaler I was using for the last 20 years and used a real hunk of junk model last summer.I have ordered the one you recomended.Appreciate the tip.

Yep. that's how my Greek buddy does it, at his house. 5-gal pail half-filled with H20.

I use the plastic one with the wobbly nubs on em.

Does an excellent job and doesn't throw scales all over the place. I have the asian one posted above but my wife only allows the plastic one inside her kitchen.

O.K. Darth, somebody has to ask, so it might as well be me.

Why does your wife ban the brass model from the kitchen?

DarthBaiter said:
I use the plastic one with the wobbly nubs on em.

Does an excellent job and doesn't throw scales all over the place. I have the asian one posted above but my wife only allows the plastic one inside her kitchen.
Click to expand...

I guess they don't use the bucket of water trick
Reactions: DarthBaiter