Go to article
Sidebar
You are using an out of date browser. It may not display this or other websites correctly.
You should upgrade or use an alternative browser.

With 2020 in our rearview and cold weather upon us, the heart and soul of Misfit Kayak Fishing was back out on the water in pursuit of the first stripers of 2021. Pete had spent a warm afternoon on the Housatonic recently and landed over 50 bass. This was NOT that day
This was a 19-degree morning just after sunrise, and when Pete and I headed out we weren't even sure that we'd be able to get our kayaks through the ice that had formed along the river's edge. I had several minor equipment-related setbacks (frozen rudder cables, frozen seat, a loose power wire), but eventually got out and surprised myself by catching about ten minutes later. It was a slow bite, and I did better than most using silver and white. Others were favoring pink, and everyone - including Pete - used white. They were small, as they typically are, though there were clearly bigger ones mixed among them. I was lucky enough to land one of them toward the end of our trip. We were off the water by noon and we had well over 30 fish between us. Cold, yes, but worth it! 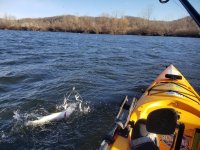 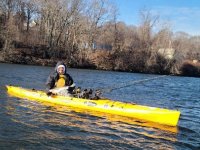 2021 Striper fishing is off to a good start!
Reactions: Chevy1, george, MOJOE and 1 other person

I also want to give a shout out to the Hook, Line and Sinker Restaurant/bar which is located a stone's throw from the launch. Great comfort food, great portions, great prices, cold beer: just what the doctor ordered after a day on the water and a way to support the local economy.
Reactions: longcast, george, MOJOE and 4 others