Instead of separate reports, I'll just keep updating this thread when the "muse is upon me". Would certainly bore the crap out of everyone if I posted every time I went fishing as it's just about an everyday event. I'm friggin spoiled rotten and almost feel guilty that I'm having so much fun...

Nice sunset soiree this evening, 3 22" fish and 3 26" ones. I like the larger fish, BUT extremely concerned of the lack of smaller fish which should be around this time of year; I've yet to catch anything less than 21".

That does not bode well for our future. We need a couple of good spawns and quick! I do hope this spring turns out very successful for both the Chesapeake & Hudson...
Reactions: MOJOE, Fluke Whisperer, longcast and 3 others

Now for today's "Popping for Bass in Skinny Water Lecture". Early in the season, when water temps are hovering at around 50°F, it is CRITICAL to fish in glassine water conditions. The calm water is key to your success for the following because it enables you to be one with The Force:

Blackened Stripah - It's what's for dinner at Chez Roccus tonight!! 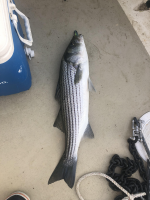 At our family party last weekend, I used a time-tested marinade from the Weber Grilling Book. Dijon mustard, horseradish. a little brown sugar, EVOO. The Bass disappears very quickly with that recipe!!
Reactions: Chevy1, MOJOE, WhatKnot and 2 others

Keepah #5 on the Season and a serious loss today

Hellacious SSW this AM over "the spot" that was in synch with a running tide, making anchoring up tough, taking me 4 tries to get secured in an "OK" spot, not the optimal. No worries, within 10 min I was into a probable keeper, but dropped it.

Was duly upset, but 10 min later I was into another good fish that forced me to hop onto the bow, no easy feat for me and my large feet, in order to fight the fish who immediately ran under the boat to the other side. As I was dancing around the cabin, the sacred fishing hat of 10 years was nearly blown off my head, so I took it off and tossed it into the cabin. At least that was my intention, but a huge gust of wind popped up and caught the hat, sending it out to sea, much to my dismay. Immediately my brain, "You have to win this one for the hat!" and after a very respectable tussle, a beautiful and fat 30" bass was in my net.

Unhooked, revived, and let the bass go, she was a real cover girl, but I figured I needed to get her into the water ASAP so no photo. Soon after that landed another "blunt", a fat, healthy 23" fish.

All in all a decent morning, but more of a pyrrhic victory considering the loss of the hat. I can rationalize things a bit in that it was starting to fall apart and was going to need to be replaced. At least it was lost "under fire", giving it's life for a good fish...
Reactions: Chevy1, longcast and MOJOE

Almost a carbon copy of yesterday, and no lost hat...

Another morning of high SSW winds with the added je ne sais quoi of rain, but I still couldn't sit in front of a computer when the bass are calling, so out I went at 06:00. Got to "the spot", and was successful in anchoring up right away; figured I'd open my one operable cockpit windows wide to "spill" some wind and it did help.

Started to pour and I was wondering WTF I was doing out there, but within 5 casts a very nice bass crashed my plug, splashed violently on top and was gone, so even though she wasn't well-hooked, I certainly was. About 5 min later a cast into the exact same spot yielded another violent strike, and I was latched onto to a very angry bass. At least it didn't run to the other side of the boat, so there was no need run across the bow this morning, and after a spirited fight, the 28" beauty was on the deck, to be quickly unhooked, photographed, and returned to the water. I still have striper fillets in the fridge so no reason for retaining her. Caught 2 others and things slowed down so I called it quits for the morning.

My hat selection was successful and although the old one will be missed, its replacement seems to have good ju-ju. Enjoy the Holiday Weekend!! 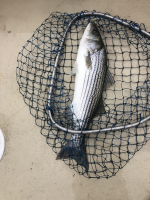 Seems like your early season ratio of keeper sized fish is better this year???
Reactions: Roccus7

First time getting Keepahs in May, and before mid-June...
Last edited: May 29, 2022
Reactions: longcast, MOJOE, cany and 1 other person
O

First time getting Keepahs in May, and before mid-June...
Click to expand...

All those bunker around along the coast, bass got fat!

No slot stripah today, one near miss at 27", along with 2 other dinks. Optimal tide was 07:30 and the bright sun this AM didn't help things.

Catch 'em up my friends!!
Reactions: longcast, captmike28 and cany

In a rare, and unusual circumstance, I decided to "Adult" this AM when I woke up at 03:30. I looked at my watch and the tide calendar and realized it was NOW or LATER in terms of ability to get off my dock due to the moon low tide. Since incoming has been good right now, I decided on LATER, and rolled over until 06:00, when I had an hour to read emails and surf. Part of my angst was that today was the first day in WEEKS that was dead calm, optimal conditions for my popper fishing.

Hopped onto the boat at 07:00 with the intention of hitting my "Go To" early incoming spot. As I got there, I realized there were sporadic fish breaking all around the area, cut the engine, turned off the sounder/GPS and proceeded to have a nice bite for around 20 min, catching 6 including a slot fish that was sent back for another day.

The first time the slot fish approached the boat, I looked down to watch another fish the same size as it grab the top hook on my popper and actually get hooked!!! There I was with 2 "Keepahs" on the same lure at the same time!!! That only lasted for a second as the new fish got off the lure. Can't decided which feeling I had more of, a sense of loss because I missed a shot at a double keepah, or relief, knowing at least I'll catch one keeper.

All in all, a delightful AM.
Reactions: AllyKat, longcast and cany

Today was another evening ebb event, a taxing one in that the water was quite choppy, which is not the best for working a popper in. Managed 3 decent fish and was about to call it quits on the slack, but decided to take a few more casts.

Glad I did, as one cast got absolutely CRASHED by one large, and very pissed off fish, that took off on a screaming, greyhounding run. Since this is behavior is very atypical of striped bass, I wondered if I had hooked into my first Maine bluefish, and a gator at that. The constant long runs, and lack of head shakes, kept me wondering if there was a yellow-eyed demon on the other end of the line. Eventually the fish tired, and I found myself netting a very fat, 31" striper, the best of the season to date. To honor her valiant performance, she was quickly released to fight another day.

Maine - Life as it should be!!
Reactions: Matts, Snapprhead27, AllyKat and 2 others

First cast on the drift was absolutely rocked by a freight train of a fish. After a spirited fight that involved making sure I didn't get snagged on a lobster buoy and a couple of moorings, a beautiful 32" fish was aboard, another victim of my "Chartreuse Caboose", thank you Capt. N Bob Skinner.

Drifted down to an area where there were some fish breaking, but they didn't seem very interested in my popper, once again getting lots of whirlpools, but few hits. Finally realized that they were large fish slurping down alewives!! So I took out my "elephant gun" armed with a large X-Rap Sub Walker, the closest thing I had on board to an "Alewife Slurpee". There were still swirls and Godzilla-like wakes following that plug with no hits, getting me more frustrated until I got slammed by a second 32" fish. Regrettably, she swallowed the plug and the hook pierced her heart, so I kept her.

As per usual, I was fishing all by my lonesome, not another fisherman to be seen, but a truly enjoyable morning with a total of 10 bass from 19 - 32". June is busting out all over!!

Keepah #1 and the Chartreuse Caboose 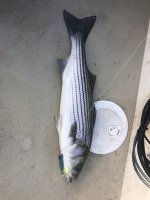 Big fish #2 and the Alewife Slurpee 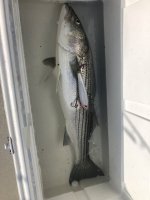 Reactions: Chevy1, longcast, george and 5 others

Well when I filleted that girl, turns out she had 2 alewives in her gut, can't figure out why she'd even look at my lure!! 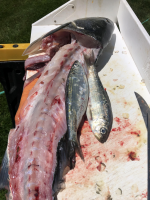 Reactions: Chevy1, MOJOE, longcast and 2 others

Roccus7 said:
Today was another evening ebb event, a taxing one in that the water was quite choppy, which is not the best for working a popper in. Managed 3 decent fish and was about to call it quits on the slack, but decided to take a few more casts.

Glad I did, as one cast got absolutely CRASHED by one large, and very pissed off fish, that took off on a screaming, greyhounding run. Since this is behavior is very atypical of striped bass, I wondered if I had hooked into my first Maine bluefish, and a gator at that. The constant long runs, and lack of head shakes, kept me wondering if there was a yellow-eyed demon on the other end of the line. Eventually the fish tired, and I found myself netting a very fat, 31" striper, the best of the season to date. To honor her valiant performance, she was quickly released to fight another day.

You are on a great roll, Roccus!
I'm sure that over the years most fisherman have discovered the nearly all fish have their own "personality". Sometimes the big ones almost swim right up tot he boat with no fight at all while a smaller but more energetic fish will really put yo to the test. One of the great things about fishing!
Keep up the good work.
Reactions: MOJOE and Roccus7

@Roccus7 . You better watch out. You've probably surpassed the total number of fish that NOAA counted last year I think you guys are way over the target

That's what happens to us every year. Congrats on all of those keepers. Just be sure to follow FDA on consumption

Roccus7 said:
Well when I filleted that girl, turns out she had 2 alewives in her gut, can't figure out why she'd even look at my lure!!

Put a hook in that and pull it across the top making lots of noise!!
Reactions: Roccus7

Posted too early, at 08:00 I decided to run out again because it looked so nice and calm out there. Got 10 fish, 19 - 28" so another potential keeper that I let go back to fight another day.
Reactions: MOJOE and longcast

This morning's early AM outgoing report is 4 fish, 21 - 28". Am heading out again to catch the flood which seems to be best lately as the brit herring have made an appearance...
Reactions: longcast and MOJOE

My old buddy Joe (Seacurity) got his personal best a few minutes ago at 55 lbs. 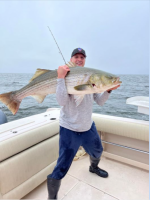