Now that's a big azz baby shark!! If you want to catch one, better get a bigger boat...

The research appears to confirm that, even as newborns, the extinct sharks were very, very big. 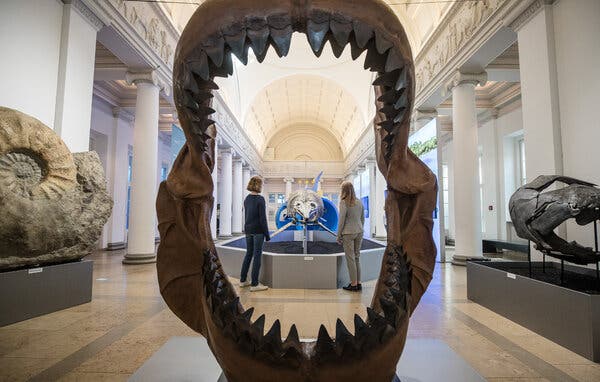 The jaw of a megalodon on view at the State Museum of Natural History Stuttgart, in Germany. Credit...Christoph Schmidt/dpa, via Getty Images

In many ways, megalodons — the long-gone, leviathan predecessors of today’s sharks — had it made. Stretching up to 50 feet in length and weighing perhaps 110,000 pounds, they ruled the ancient seas with an iron fin.

That bigness for the fearsome fish might have started even within their mother’s bellies, a new study suggests. Measurements taken from fossils show that even at birth, these sharks might have already been six and a half feet long, potentially a result of in-womb cannibalism that’s still characteristic of some modern sharks.

Considering the heft of adult megalodons, it’s probably not shocking that they’re born big, too. But the study’s findings represent some of the first insights into the sharks’ size when they’re fresh from the womb.

“It is quite possible that they represent the largest babies in the shark world,” said Kenshu Shimada, a vertebrate paleontologist at DePaul University in Chicago and lead author of the study, published Sunday in the journal Historical Biology.

Little is known about the biology of megalodons, which went extinct some three million years ago, leaving only scant fossils behind to document their legacy. (Shark skeletons are mostly cartilage, which is much more fragile than bone.)

But scattered teeth and bits of backbones offer clues. Generally speaking, the bigger the teeth, the bigger the shark. And, much like trees, the vertebrae in shark spines grow outward by laying down tissue in concentric rings, logging annual growth. 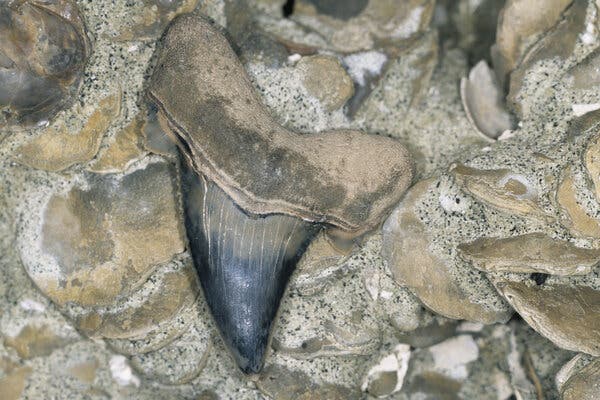 To estimate how long the sharks might have lived, Dr. Shimada and his colleagues turned to the most complete existing megalodon skeleton unearthed to date: a 15-million-year-old specimen tugged from rocks in Belgium in the 1860s that had once been about 30 feet long.


Scans of a subset of its approximately hundreds of vertebrae — some the size of grapefruits — showed the shark had died at the age of 46. The researchers estimated the meg’s life expectancy to be around 88 to 100 years, implying that their specimen had been roughly “middle-aged,” Dr. Shimada said. They also back-calculated the shark’s size through its earliest years, and found it might have been more than six and a half feet long when it was born.

“That’s a really big baby,” said Mr. Cooper, who was not involved in the study.

To reach such a staggering size, burgeoning megs may have snacked on each other while still in the womb, Dr. Shimada said. Most sharks hatch from eggs inside their mothers’ bodies, then are birthed as live young. But the pups of some species don’t take kindly to roommates: Once hatched, they will begin to casually devour their unhatched siblings, which helps them beef up before being born.

“It’s this big, calorie-dense, nutritious meal that can help those embryos get bigger, faster,” said Allison Bronson, who studies the evolution of fish at Humboldt State University in Arcata, Calif., but wasn’t involved in the study.

With that much heft in tow, mini-megs might have emerged ready to duke it out with potential predators, or at least dwarf a good number of them in size. A voracious appetite, coupled with warm-bloodedness, might have helped them snarf down plenty of prey, allowing the juvenile terrors to bulk up even more.

Mr. Cooper said the study provided crucial data on a poorly understood animal. But he noted that some calculations it used were based on data gathered in the 1990s, when researchers relied more heavily on great white sharks to estimate aspects of megalodon anatomy. Drawing too close a comparison between the two animals, he said, can result “in underestimations in some specific body dimensions.”

It’s also hard to know how representative this one individual megalodon was of its species, Dr. Bronson said. “There’s a lot of variation in fishes,” she said. “Even fish of the same age, same species, can grow at really different rates and reach really different sizes.”

Researchers can’t know how difficult carrying and birthing a six-foot-plus pup might have been for megalo-moms. But “proportionally, while that baby is really big, so is the adult,” Mr. Cooper said. At maximum size, some megalodons might have spanned nearly the length of a bowling lane — plenty of space to house even a basketball-player-size embryo.

Either way, the findings might make mama megalodons seem all the mightier. Dr. Bronson drew an analogy to modern pregnant white sharks, which birth young that run about four feet long. “They look like beach balls, swimming around,” she said. “But they make it work.”
Reactions: Old Mud and BennyV

Yesterday on the outdoor channel spearlife was on.
They were diving and sifting the sand with there hands
and finding megladon teeth. They were somewhere
in the outer banks. There's lots of it on youtube.

chunkster said:
Yesterday on the outdoor channel spearlife was on.
They were diving and sifting the sand with there hands
and finding megladon teeth. They were somewhere
in the outer banks. There's lots of it on youtube.
Click to expand...

Yes, N. Carolina is a Megaldon Tooth Hunting paradise. I've seen shows where they're finding them in the muck of some estuaries. Would be cool to find your own instead of finding one under the Christmas Tree that Mrs. Santa bought for you... 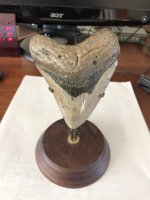