‘The waters around the city haven’t been this clean since the Civil War, and I’m determined to help keep it that way.’

They’re spotted off Staten Island, throughout Jamaica Bay in Queens and around Coney Island and Gravesend Bay in Brooklyn. A few of them appear brand-new, sitting in plain sight, lodged on the edge of a cove. Others are dirty and worn, while many are completely submerged.

There are hundreds of abandoned boats scattered around the city. Many of them become unmoored during bad storms. Others are let go on purpose.

“Many times, boats are the last thing a person purchases in good times and the first thing that’s let go in bad times,” said Nate Grove, the chief of waterfront and marine operations at the New York City Department of Parks and Recreation. He has made it his mission to remove these abandoned vessels — which he estimates to be upward of 500 — from city shorelines.

Mr. Grove has overseen the removal of 300 vessels over the past seven years, he said. “The waters around the city haven’t been this clean since the Civil War,” he said, “and I’m determined to help keep it that way.”

Mr. Grove recently spoke with The New York Times. The following interview has been edited and condensed.

Q. How did you end up with this job?

A. In my twenties, I worked on Wall Street, in the music industry and at an education start-up. I was hoping to marry my passion for music and the love I have for this city with a job, so I tried getting a position with SummerStage. That led to a meeting with Keith Kerman, who was then an assistant commissioner of citywide operations in the Parks Department. It was the beginning of the Bloomberg administration, and the development of the city’s waterfront was the focus. My timing was great. In 2003, I worked as a seasonal analyst for Keith, who had just inherited the revamp of all marinas that Parks operated. Now he’s the chief fleet officer for the city. And I’m still kind of in the same job.

It’s pretty dynamic. I work with about 20 people to run the marinas. I make sure all the fees we collect go into the city’s general fund. We plan lots of public programs so New Yorkers can get out onto the water. It never gets tiring to see all these kids get out in the water for the first time in their lives. During my tenure, the department has quadrupled the number of kayak, canoe and paddleboard launches. I believe once you get more people out on the water, people start to care about water quality. Other times I work on special projects, like building oyster reefs. 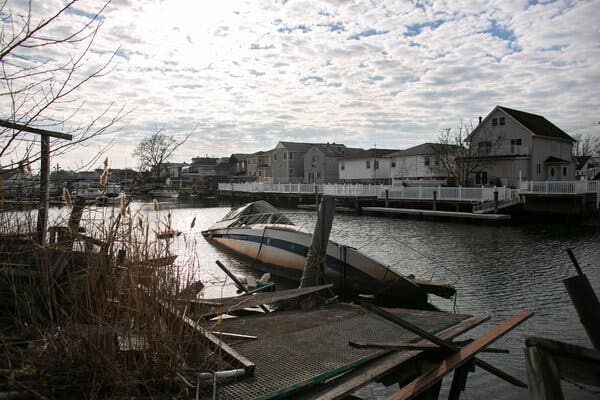 How has your job changed since Hurricane Sandy?

Right after Sandy, I managed to secure funds from the Federal Emergency Management Agency to rebuild the boat basins that were destroyed. But I also had to figure out how to clean up the 100-plus abandoned boats that were found, many of which were miles away from where they were originally moored. I realized the city didn’t have a proactive mechanism to deal with marine debris. So we eventually created an abandoned vessel and marine debris removal program, which allowed for permitting, pricing and contract bidding.

Where do these boats come from?

If you see one half-sunken boat, once you start digging, you can bet there are more. But there’s a lot of abandoned vessels in private marinas, too. Many of the boats can be found in Jamaica Bay, Coney Island and in Staten Island, Arthur Kill and Kill Van Kull, which are infamous boat dumping grounds.

Besides natural disasters, why do people abandon their vessels, and can anything be done about it?

A lot of them came down here from Long Island. But unlike a car, where some people need it for their livelihood, boats are for pleasure, but they’re expensive to maintain. So when people get to the point where they have no time to use the boat, or they don’t have the money to maintain it, they’re simply not dealt with. One way to curb abandonment is requiring boats to be insured. For the past 10 years, owners who want to use city marinas and boat basins are required to buy insurance for their vessels. That way if the vessel is damaged, the owner has a company to call and claim the boat. I think this is good practice. Otherwise, people just look the other way because it’s costly to remove a boat.

Does the Parks Department have a budget for marine debris removal?

No, I have to find grant money from city, state and federal agencies. Sometimes, City Council members allocate funds. Last year Eric Ulrich, at the time a councilman in Queens, secured $65,000. So in December, a salvage company fished out five boats in Jamaica Bay, including a giant one that had been stuck since Hurricane Sandy. Some years we fish out 100 boats, some years none.

How do you choose which boats to clean up?

I have my own roster of derelict boats I’d like to get to, but I get a lot of community input. Many times a civic association will get in touch with its councilperson. It could be that the derelict boat is causing a navigational or public hazard, which prompts a call to me. Over the years, I’ve worked closely with the Jamaica Bay EcoWatchers and the American Littoral Society to decide which boats to fish out.

Who actually cleans up the boats?

If the boats are close to shore, Parks can use its own wreckers and winches. But for boats out at sea, the department has a list of preapproved marine contractors that will come out with their large cranes, lift bags and floats. Sometimes a dive team is deployed.

What’s the environmental impact of a derelict boat?

Derelict boats are not just an eyesore. Boats are made from fiberglass, a material that doesn’t deteriorate. You also have tank fluids that can leak into the water. Once the boats are taken out of the water, the marine contractor has to cut the boat open, remove the engine and drain the tank so they can dispose of it correctly. Then the fiberglass gets crushed up and heads to the landfill.

Do you ever get in touch with the owner once the boat is fished out?

I do take down the boat’s registration number and call the owner. There have been a few instances where I’ve been able to fine the owner a few thousand dollars. Many times the number is old, or I leave a message and no one calls me back.
Reactions: Snapprhead27
Get in on the fishing talk and join now!
Continue with Facebook
Continue with Google
or sign up with email
Show hidden low quality content
Share:
Facebook Twitter Reddit Pinterest Tumblr WhatsApp Email Share Link