This Guy Needs to Be Banned From Launching a boat. Totally unbelievable.

So we've all had issues trailering and launching our boats. I don't care how good you are, there was a time that you ended up in a situation that was caused by something unexpected. Well, this guy takes the cake. He didn't miss once, And you can't believe his second go around.

On the evening of Aug. 9, a man backed his Jeep and boat trailer, with boat attached, into Onondaga Lake—missing the DEC boat launch by 50 feet and becoming stuck in mud along the shoreline. One tow truck and $800 later, the man drove away unscathed without reporting the incident to DEC’s Division of Law Enforcement. Three days later, on Aug. 12, the same man successfully navigated the ramp at the same boat launch, but failed to apply the brakes, fully submerging his trailer and Jeep in Onondaga Lake.

The allegedly intoxicated man miraculously escaped through the window of the vehicle and made it to shore. This time, a witness called 911. ECO Damrath, along with Geddes Police and Onondaga County Parks Police, responded to the boat launch immediately. ECO Damrath noted the sheen of gasoline and garbage leaking from the man’s vehicle and contacted Region 7 Spill Response experts. NRC Environmental Services responded to contain the fuel spill. Thanks to cooperating witness statements, ECO Damrath charged the driver with several violations of Environmental Conservation Law and State regulations. Geddes Police is leading the DWI investigation. 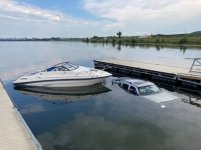 I dont see a problem boat in the water ready to go !

come out of his sunroof and away we go !
Reactions: JackPrintMD, george and MOJOE

I've seen a lot of launch ramp mishaps but never that. I've always wondered how people managed to launch their cars. I guess now we know.

Capt Richie said:
I dont see a problem boat in the water ready to go !

come out of his sunroof and away we go !
Click to expand...

That would be true around here if you launched at high with a 12' tide, when you get back at low, no problem getting the boat back on the trailer...
O

Most common thing I've seen is missing drain plugs.
Park the car, come back to the boat and