It was time to re-stock my bait freezer, not to mention my supply of Asian spices and marinades, so wifey and I meandered over to H-Mart, located just south of the Northern State on Rt. 106, Jericho. Besides dropping $160 on all sorts of foodie treats, the fish monger section had a live tank that featured these: 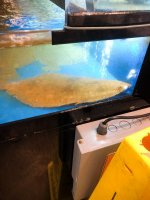 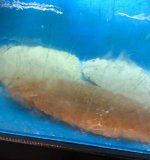 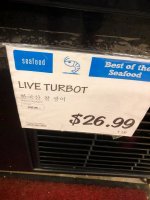 The first pic is obviously a fluke, and the second has a couple of "turbot" in it. I had never before seen a turbot - they look like a cross between a pug-nosed fluke and a sundial - sort of. Interesting fish to watch. All the fish in that tank were very alert and the fluke in the first pic was moving his eyes as I moved around the tank - I do believe he could see me. Too bad I didn't have a GULP! mullet ready to go. Would have been a fun "experiment."

Anyway, that fluke had to be in the 3lb class, so I guess it would cost a cool 81-bux to bring it home. Geez, I gotta raise my crew "gas contribution" fee.
Reactions: BennyV, longcast, Snapprhead27 and 1 other person
P

Call the DEC. Let's see if they follow up on the information. Bet they treat it like the live blackfish trade-it doesn't
exist in the DEC's eyes

Awesomest Asian supermarket I know of. If you’re a foodie and want to try your hand at Asian cooking, this is the place to buy the goodies.
Reactions: longcast, jpd and cany 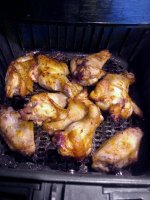 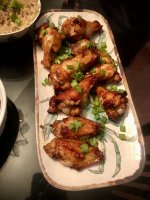 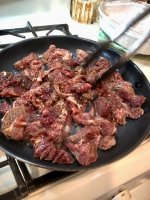 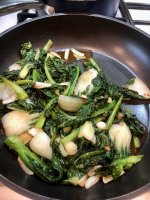 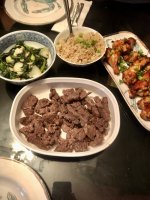 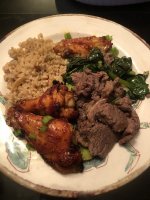 Those dishes all look great, Lep. But what happened to yesterday's Fluke?

We had a nice feast at my house last night as my stepdaughter dropped in unexpectedly at the right time, just before the fresh Fluke was about to go into the oven!! TJ's Island Pineapple Salsa on the Fluke and a few ears of Harbes super sweet Corn on the Cob. Also, excellent!
Reactions: Leprechaun, Chinacat, longcast and 1 other person

Mañana for the fluke. Picked up a few goodies for that as well.

Those wings were done in an air fryer? I can't cook anything in mine. Is it legal to sell live fluke? As noted, not that it would ever be enforced.

Air fryer wings are the bomb! I have no idea about fluke-selling regs. I have enough trouble figuring out the stupid rec regs, let alone the commercial ones!
Reactions: Snapprhead27 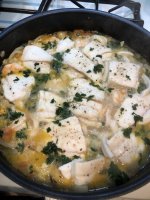 And over Barilla "Linguini Fini" 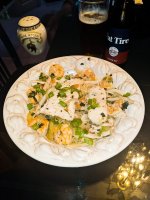