OVERBORED said:
Just read an article how the contractors have provisions regarding being able to use the best available technology at yhe time of construction. Apparently the 2megawatt windmills (old tech) are 200ft tall. (Block Island) The new 11 megawatt towers are 500ft tall!

For the new towers to not be seen from shore, they would need to be 35miles out.

The footprint is looking much bigger now!!!!!
Click to expand... 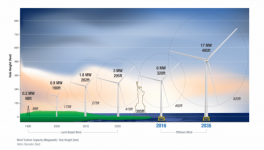 Just think of how many more birds will be chopped up with those big ones.

Do you think these turbines will be easy to get into Pt Jefferson? And this is a small one. 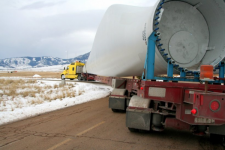 george said:
Do you think these turbines will be easy to get into Pt Jefferson? And this is a small one.

They'd have to barge them in... 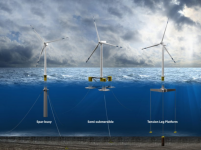 They're not even sure what type of base they are going to use. Should they go this route you can forget about all of the great fihsing they claim they will attract. That would be totally unfishable.

This sure doesn't look too fishable. It looks more like a hazzard. 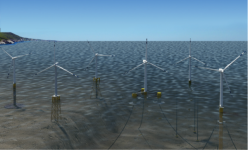 Roccus7 said:
They'd have to barge them in...
Click to expand...

Exactly. Barge them in and barge them out.
O

Imagine the threat to shipping should one of those behemoths break loose from a mooring during a storm!

Good luck getting something like that under control not to mention the damage the anchors would do being dragged across the sea floor.
Reactions: Avenger
G

Do these have the potential to freeze up like the ones in Texas did?

@Grady180 The problem is those are already off of the table with the NY wind farm. This is from a recent article in Newsday and it's straight from the horse's mouth:

When New York State in 2019 awarded a multibillion-dollar contract to Norwegian energy giant Equinor to build wind turbines off the Long Island coast, one critical element of the award was its planned use of giant concrete foundations.

That choice would lead to hundreds of jobs, most of them in the Albany area where the components would be made, and provide "tremendous environmental advantage, minimizing risks to fish and wildlife," according to the state that year.

But Equinor has yet to fully commit to using those "gravity-base structures" for the project, or for another larger wind farm to be constructed adjacent to it. Its recently filed construction and operation plan provides a detailed review of an alternative option: using giant monopiles that are driven into the seabed from a pile-driving barge.

In the same report, Equinor noted that a gravity-base structure "under environmental forces is more sensitive to weak horizontal layers across the foundation footings." And it says that the concrete foundations have already been "removed from consideration" for use in an offshore substation that's part of the project because of "design challenges."

Asked this week whether the concrete foundations, which act much like heavy backyard umbrella stands to keep the turbines upright in stressful offshore conditions, were still in the cards, an Equinor spokeswoman hedged.

"We aim to use the best foundations for our project possible — from an environmental, operational, construction and long-term commercial standpoint," spokeswoman Lauren Shane said in a statement. She noted the construction plan "contemplates both gravity-base structure (GBS) and monopile foundation types. We continue to assess the viability of both types ... as we move toward finalizing the project design."

Using pile-driven monopiles has one significant advantage over gravity-based concrete foundations: lower cost. But it would also mean the 600 to 800 promised jobs making the giant concrete structures in the Albany region could be significantly reduced or eliminated.

If you look into pile driving you'll find that it takes 3500 hits to get one in the ocean. I honestly don't think they will be permitted to use them. Being it's the lowest cost option though seems like the route they would like to take.

There are so many questions that no one has answers to. They want to have this thing up and running ASAP and they can't even tell us what base they're using?

This is what I know for sure about the Block Island project that we hear so much about. Remember these are much closer to land and they're about 1/2 the size of what's going in offshore.

They have been off since the beginning of August for routine maintenance supposedly. Read this for first-hand accounts of people seeing workers in Hazmat suits working on them.

They found that the cable - that is much shorter than what's being proposed - is exposed. It's a $30 million fix. It was supposed to be done this year but it's not. If you check out the link you'll see that the cable is exposed and not at the 6-foot depth in a number of places. Now imagine one of those cables from Queens to 15-miles offshore.

I'm all for green energy, but it's very hard for me to support this project. They're already having issues with the small inshore turbines at Block. The costs are going to be ridiculous See this study from the Manhattan Institute Decommissioning these things is not easy, and not one has come up with a plan for that. Or at least I can't find one. I figure it's one of those kicking the can down the road deals that will leave a littered ocean of turbines. Here's one example of the cost of taking them down.

In Minnesota, Xcel Energy estimates conservatively that it will cost $532,000 (in 2019 dollars) to decommission each of its wind turbines—a total cost of $71 million . . . And these are on land!

Believe it or not, this is just the tip of the iceberg in reasons why I question it.

george said:
View attachment 38060
Just think of how many more birds will be chopped up with those big ones.
Click to expand...

hopefully its all cormorants !
Reactions: Capt Richie and Avenger

WhatKnot said:
Do these have the potential to freeze up like the ones in Texas did?
Click to expand...

I have no clue but I sure hope not. The Biden administration approved an offshore wind farm off the coast of Rhode Island on Wednesday as part of a plan to deploy 30 gigawatts of offshore wind energy by 2030.

Seven major offshore wind farms would be developed on the east and west coasts of the U.S. and in the Gulf of Mexico under a plan announced last month by the Biden administration to build infrastructure, create jobs and address global warming. Deploying 30 gigawatts of offshore wind energy would generate enough electricity to power more than 10 million homes.

“Moving South Fork Wind forward brings us closer to a cleaner and greener future,” she said in a statement.

Orsted is developing the South Fork Wind project with utility Eversource. The Interior Department approved up to 12 turbines. Leaders at Orsted and Eversource celebrated the announcement, touting the project’s potential to reduce air pollution, help combat climate change and boost the economy by creating jobs.

Rhode Island coastal regulators gave the project critical approval this spring over the objections of the fishing industry and some environmentalists. Commercial fishing businesses have said planned offshore wind projects off the East Coast would make it difficult to harvest valuable seafood species such as scallops and lobsters. Some conservation groups fear that big turbines will kill birds.

The project off the coast of Massachusetts, Vineyard Wind 1, is expected to produce about 800 megawatts, enough power for more than 400,000 homes. The first steps of construction will include laying down two transmission cables that will connect the wind farm to the mainland.

The administration expects to review at least 16 construction and operations plans for commercial offshore wind energy facilities by 2025.

“We have no time to waste in cultivating and investing in a clean energy economy that can sustain us for generations,” Secretary of the Interior Deb Haaland said in a statement. “Just one year ago, there were no large-scale offshore wind projects approved in the federal waters of the United States. Today there are two, with several more on the horizon.”

Hold onto what's left in your wallets, guys. We will all be forced into paying even more for this so-called "clean energy initiative" while at the same time the supposed "protectors of the environment" will be damaging our precious waters and beloved sport even further. How much sicker can it get?
I may not have that many more years left to watch this total degradation of our lifestyle and really sensible former energy policies, but I feel really bad for the next generation that actually believes this BS and will pay a much steeper price in the long-term.
Reactions: Avenger

I wonder how much thought and consideration was given to fossil fuels back in the day? Answer ……. ZERO

But today, even with the Joint Chiefs of Staff, concluding that global warming is the NUMBER 1 threat to our national security, we want to continue to think this to death.
O

MakoMatt said:
I wonder how much thought and consideration was given to fossil fuels back in the day? Answer ……. ZERO

But today, even with the Joint Chiefs of Staff, concluding that global warming is the NUMBER 1 threat to our national security, we want to continue to think this to death.
Click to expand...

This is a global problem. As such, my question is and always will be......Are the Russians and Chinese on board with reducing their carbon footprints?

History and common sense tells me NO.

We will be forever chasing our tail because the 2 controlling political party's in this country have very different opinions on global warming. Cant change course every 4 years and make an impact.

I dont know what the answer is. Perhaps a 3rd political party that will represent the moderates in this country. Maybe then we'll make an impact.
P

Give Free solar to anybody that wants it. Would be nice if everybody could charge their electric cars using solar and gas went down to $2.00 a Gallon for boaters, RV'ers.
Reactions: pequa1
O