Will the DEC ever build a boat launching ramp on Peconic Bay ????

live bait said:
The Celtic Quest makes a contract with the town for the month of May, I don't know what the $$$ amount is. When fares show up in the morning to sail, the mate gives them a parking permit good for that day only. The boat has been coming to Jamesport for about five years now, except last year when they were shut down. I guess if he kept the boat at his home port in Port Jef. he would be tied at the dock for most of the month. I was there this afternoon when the boat came in & he sure had a crowd, at $100 a head.
John
Click to expand...

Thanks John
Hopefully the town is making enough money to make it worth it
Has it ever been bad enuf that that you weren’t able to use the ramp because its too crazy or busy?

Pangaroo said:
China Cat, you complained about getting your stones busted as a Non Resident.
Click to expand...

I didnt do a good job making my initial point
The emphasis was meant to be on the fact that my buddy lives around the corner from the ramp and IS a resident. I live close by in town of Southampton and trying to help a legal local resident
Yet a non local head boat and all their customers get to use a place thats 2 mins from my buddies house because they buy in and we get hassled
Thats my point.
John gave me my answer

Chinacat said:
Thanks John
Hopefully the town is making enough money to make it worth it
Has it ever been bad enuf that that you weren’t able to use the ramp because its too crazy or busy?
Click to expand...

no I have seen the mates making it clear not to park in the trailer spots. Last couple years we now need a parking permit and a launch permit, for us old goat’s it’s only $5 each.......John

Is Riverhead going back to selling non resident permits this year?

As a southampton resident I cant complain about access to ramps
Although my boat stays in the water and there is a private ramp in my community, its nice knowing there are nice town owned ramps that give access to peconic shinnecock and moriches. My previous boat was on a trailer and I used all of them

Chinacat said:
Is Riverhead going back to selling non resident permits this year?
Click to expand...

Thanks for the pics!! Would it be illegal to launch kayaks other car top boat from those slabs prior to its completion? assuming one could get the kayak into the water and then park somewhere else off site. Hate to be that guy but access to any decent LI waterway is tantamount to Commando/ Guerilla Warfare! SMH

It’s all fenced off by the construction company, heavy equipment being used, I don’t think they would let anyone in, even if you said please..........John
S

Thanks!! Saves me a drive and a bribe... Both now to be put to better use. Lol
P

Sag Harbor is the only place a Non Resident can launch for a reasonable fee. Like $15-20 dollars. You can even park your boat trailer on the street a block or two away. Haven't used the ramp to launch, just drove by it after reading a story in the LIF last summer or fall.
S

Does Sag Harbor provide access to the peconics or the sound?

I don't know where the ramp is in Sag harbor, but there is access to the Peconic from Sag Harbor through the south race, as far as access to Long Island sound you would have to travel into the Peconic then go through Plum Gut which would put you into the east end of Long Island Sound. I would suggest a long hard look at your chart before attempting such a trip,.
John

It's on Bay Street
If you are coming from the west you come over the bridge into town and go straight instead of turning right in the downtown village area.
It's apparently free to village residents but no clue about fees for non residents

The ramp in Sag Harbor is right in the heart of the village and gives you access to Peconic Bay. Tight Lines Tackle is a block away - Tel. # 631-740-0740. I read in the LIF about this ramp, you pay the Harbor Master to launch. His or Her office is right next to the ramp. The LIF said the Non Resident Fee was $15 last year. I drove by the ramp and people parked their trailers on the side streets near the ramp, there were no signs that said no trailer parking.
Last edited: Jun 3, 2021
S

Thanks all. I was only asking because my preference was the peconics. I have a couple places I can put in to fish the sound. The peconics is more like fort knox.. Though I have probably already missed the spring scup run. 2021 is turning out to be a rerun of 2020 as far as family affairs and work life drama go. By the time I can put in the fishing shouldd be fairly solid in my neck of the woods... Jamaica Bay
Reactions: george and BennyV

They still pushing dirt around but looks like progress 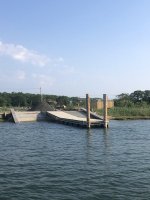 Was by the site this morning, looked like they have the wash down area done with some type of paving blocks, & the entry road cut, but no pavement yet & still pushing piles of dirt around.......John 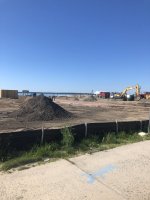 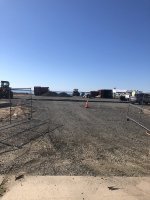